The Making of Paddington Two 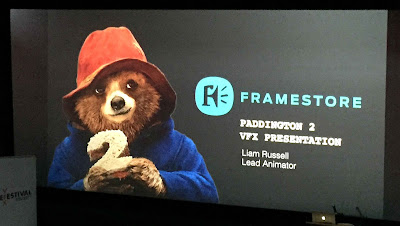 One of the best animation talks at the recent VFX festival in London  was the presentation by Framestore on the making of Paddington 2.

Lead animator Liam Russell presented breakdowns of several key sequences in the film, including the excellent prison sequence, and the hyper-kinetic train sequence at the end of the movie.

He also gave some great tips on what kind of animation demo reels Framestore looks for - scroll down to the bottom to find his personal take on this always-important subject. 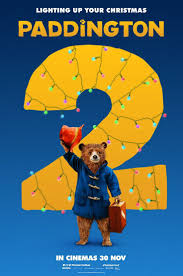 Framestore did over 1,000 shots on the film, dividing the work between London and Montreal, with a team of 600 artists. You might think they could re-use all the assets from the first film, but cg technology is a moving target, and the client wanted a new and improved look for the bear, especially the bear's eyes.  Framestore were able to use some new tech they had developed on "Rocket", for Guardians of the Galaxy, to make Paddington's eyes even more real and believable.

Previs
The Framestore animators also got to previs the film, meaning that they did a first pass of super-rough animation, to block out the whole movie, with animators spending just a "couple of hours" on each shot.

In effect, the previs reel was a kind of sophisticated 3D layout pass, with plenty of rough animation to nail the timing of the physical comedy, but executed swiftly so as to keep control of costs.

Creating a CG bear - The Trouble with Eyes
It was important to make the eyes feel as real as possible, and in particular Baby Paddington had to be very much like a bear, with big eyes, looking very cute.  Eye development was very important. The client loved the eye work on Rocket from GOTG, so they used similar tech for Paddington 2.

To get maximum realism, the animators filmed their own eyes moving about in extreme close-up, to really capture the detail of how eyes move. They also needed to shoot lots of reference of bear paws; all the parts of the bears' body to make them feel as real as possible.

Costumes were also important; Paddington had a number of different costumes, including a chef, a stripey prison coat, and his duffel coat. They also had to do fur tests, cloth tests, tests with Paddignton's marmalade sandwich - all this had to be worked out before production could begin.

Framestore had to build a lot of CG assets - including a fully rigged CG train, digital doubles of the actors, jars of marmalade, dozens of props, and an Irish Wolfhound named Wolfie.

Character Performance & Motion Test
The animators had to do lots of motion tests, lipsync tests, tests for bears crawling, walking, and running. Paddington has a "very specific way of walking", so they did "lots of tests" to get it just right, and to get the client to agree to look and feel of the character.

Live action reference
Meanwhile, the animators shot lots and lots of reference of themselves acting out the shots, to get the best results. They also brought in Javier Marzan, a comedy actor, to act out the sequences, and was filmed by the crew performing lots of the shots. This was done to make sure the acting choices were just right.

Interaction between the live action characters and the CG is vital. Making this work is very important. Eye lines are crucial, and the characters need to feel believably immersed in the same world.

Creating Wolfie
Framestore also made an Irish wolf hound. They had a real dog called Percy, who did many of the shots on set (dogs are, obviously, very trainable), but it was "very hard to get Paddington to run on the dog's back", so these shots had to be completely CG, with a digital Wolfie.

Sets
The "Paddington in Prison" sequence was mainly done in Montreal, where the studio had to create a full CG version of the prison, down to the last brick, which had to match the real set.  The train chase sequence was mostly done in London, and they filmed the sequence on a road in the north of England, then composited in digital train tracks - so the road looked like a railway track. They had two real steam trains on set but, in the end, 90% of the train shots are fully CG - only a few shots are of a real train.

Demo Reel Tips from Framestore
Framestore does hire junior animators, but not very many, and their standards are very high. So, what should go into a successful demo reel? The answer, said Liam, is...

Posted by Alexander Williams at 10:01