Frame Store's Fantastic Beasts - And How They Made Them 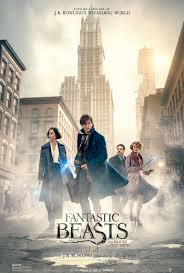 At the VFX Festival last week, Framestore's Christian Manz talked about "Fantastic Beasts and Where to Find Them", explaining how Framestore brought these amazing digital creatures to life.

The address followed on from a packed recruitment talk also given by Framestore - both events were standing-room only.  Framestore is one of London's leading VFX houses, one of the reasons why London is a global hub for high-end visual effects work.

So, what were the secrets behind this remarkable film, and how did Framestore bring photo-realistic goblins and other fantastical creatures to life?
Christian Manz is the creative director at Framestore. He started at Framestore as a runner, "making tea", and getting promoted "because he made bad tea".

Meanwhile on his own time he "taught himself Photoshop, AfterEffects", and started "doing commercials" on a desktop box.  Later he became "comp lead and supervisor" on Harry Potter - doing the Hippogriff - the film that "proved that London could do visual effects". Then he was supervisor on the second Narnia film.  Later Christian did Dobby for Harry Potter - around 90 shots.

As creative director, Christian helps to "guide less experienced supervisors" at the company, doing the test work "which got them Beauty and the Beast". And two years ago he "got the job to do Fantastic Beasts".

Development
Christian worked with animation director Pablo Grillo to come up with the visual style, submitting ideas to director David Yates. Today, VFX is "not just post" - they're "involved from the beginning".

Newt's Case
Newt's Case itself (ie the magical suitcase in the film) required a lot of thought - how would the creatures get in and out of the case? They did rough pre-viz animation to show how it might work.

To get the actors in and out of the case, they ended up cutting a hole in the floor of the set, so the actor could drop through the hole, just like the silent film actors did back in the 1920s.

JK Rowling also had a good deal of input into how things should be done - as Framestore pitched ideas for how the interior of the suitcase might look.  Soon they developed the idea that the case interior might be "like a bio-sphere". Sort of like a "magical zoo", with "dioramas". They had a "room full of boards" presenting ideas, and pitching material for the story. The process was "amazing, because you don't get to be part of the process like this too often". Framestore did the pre-viz at the same time as Production Designer Stuart Craig (a Potter veteran) "designed the set", so there was a lot of "mutual interplay of ideas".

Many companies worked on the film; sometimes "up to five companies working on a single shot", and things could get "pretty emotional".  This involved "bouncing terrabytes of data" from one facility to another.

The Niffler
For the Niffler, the visual development team looked at Honey Badgers, and the duck-billed Platypus. Animation director Pablo Grillo drew sketches of what the character might be able to do, coming up with visual gags for the character.

Gnarlak the Goblin
They filmed the actor, basing the animation heavily on Ron Perlman, using him as reference for the final character.  Mo Cap data was used by the animators to create the final animation.

New York City
The live action for NYC was actually filmed in Watford, partly because New York City "has changed a lot". However, the team went to NYC and "filmed all the buildings they wanted to use", building 3D sets.