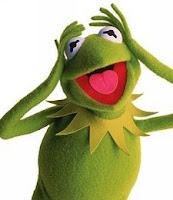 What is "Head Muppeting" in animation? It's a term I first heard used by veteran animator Sydney Padua when she was teaching an animation class at Escape Studios.

"Head Muppeting" is a similar concept to that of "hitting the accents", developed by Richard Williams in his book The Animator's Survival Kit.

It means that, when you are animating a dialogue shot, you need to keep the character's head in motion, to make the audience believe that the character is saying the lines.

Animate like the muppets
The biggest head motion should correspond to the bits of the dialogue that are the loudest, most pronounced, or have the most emphasis.  That way, we know that the character is actually speaking the line - just like in The Muppet Show.

The puppeteers who make the muppets perform don't have a lot of control over the mouth shapes - the mouths mostly just open and shut. But they keep the character;'s heads moving when they are talking, thereby creating the illusion that the character is talking.

This may seem like an obvious point. But one of the most common mistakes made by junior animators is to have too little head muppeting; making it at times hard to tell whether or not a character is actually talking. To see this principle more clearly, watch the video below.

What is Head Muppeting? - Video Tutorial

And to see a clip of the muppets doing "head muppeting", watch the short clip below.

By "accents", we're not talking here about a regional accent - say a Scottish or Welsh accent - we're talking about making it clear in the poses that the character is speaking the line of dialogue.

In this case an "accent" is the part of the line of dialogue that has emphasis, and need to be punctuated. Take a look at the example from the Animator's Survival Kit on the right.