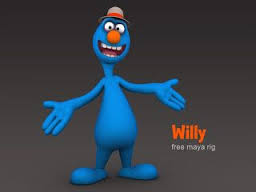 Willy is an excellent free rig, created by Matthew Moore, and free to download for use by Maya animators.

Willy is a broad, flexible and cartoony rig, very simple to use and great for the early stages of learning animation - especially lip-sync.

Like all rigs, Willy has his quirks. So, how can our animation students get the most out of Willy?

Where can you find Willy?
At http://www.matthewmoore.me.uk/willyrig

What is the license type?
Willy is freeware.

How to Use Willy's Facial Controls
You can toggle the visibility of Willy's facial controls on and off by selecting the eye icon to the left of Willy's head.

Create a Face Camera
To animate Willy's facial controls with ease (which sit slightly to the right of his head), create a new camera, name it faceCamera, and then parent the camera to the facial controls. Now you have a face camera.

Lipsync Presets
Willy comes with some useful lipsync presets, so you can animate vowels and consonants quickly. To find the presets, first turn on the Facial Controls (see above). Then, select the "presets_anim" red circle to the left of the jaw control. Look in the Channel Box and you will find a menu of things like "smile closed" and also vowels and consonants. Toggle between 0 (no effect) and 10 (maximum effect) to turn them on and off.

How to turn on elbow pole vectors
The elbow pole vectors are turned off by default. To turn them on, select the wagon-wheel shaped FK/IK switcher next to Willy's arm controls. Look in the Channel Box under Pole Vector Vis and set this to 1. You will see the Pole Vector appear in your viewport.


How to animate fingers quickly
To animate Willy's fingers, select the "fingers_anim" circle icon around his fingers.  Look in the Channel Box for sliders which allow you to, for example, make a fist shape very quickly.

What if Willy is behaving oddly and the rig isn't updating?
Willy is an older rig and may not behave well in newer versions of Maya (2016 and up). If strange stuff happens, try going into your preferences, go to Settings/Animation, and change Evaluation Mode from DG to Parallel. Willy should work better now.

Posted by Alexander Williams at 13:28