We are delighted to announce that the short film "Moon Rockz", written and directed by Molly Babington, has won an award for "Best Sci-Fi" at the Flicks Film Festival.
"Moon Rockz" was a collaboration between students at Animation Apprentice and Escape Studios, involving Animation Apprentice students Jonathan Humphries and Matt Neputin.
Moon Rockz
"Moon Rockz" tells the story of the moon landings from the point of view of the moon, and has also been a finalist at five other international film festivals.

Moon Rockz Storyboard
Moon Rockz was based on an original idea by Molly Babington, who also did the storyboard animatic below:


Moon Rockz - Final Film
Below you can see the final film, and how it developed from the storyboards above.

Without colour scripts, the lighters would have lacked a coherent road map of where they needed to get to. To see more about the importance of colour scripts in animation, read this blog post.

Santi helped the animation team push the standard of their work, helping them to make their shots more expressive, and better communicate what the characters are thinking and feeling.

Santi gave the Moon Rockz team the time to go through all the shots on the film, drawing expressive poses in Syncsketch and making sure that every shot was as good as it could possibly be.  All our animators got notes, and all of them were able to push their shots a little bit further before the final May 29th deadline.

Software
"Moon Rockz" was animated in Autodesk Maya, edited in Adobe Premiere, and rendered in Arnold. 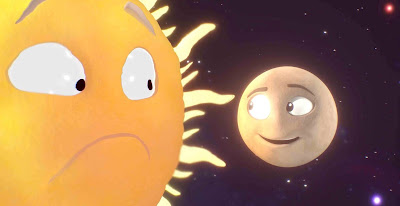 Posted by Alexander Williams at 00:44