Why Animators Have Too Many Poses

One of the most common mistakes made by student animators is to have too many poses, making the overall performance feel too busy, too over-animated.

The trick is to have the right number of poses for a shot, and let the characters stay a while in the poses we have chosen. The best way to do this is to draw clear thumbnails at the beginning, with clear poses, and not have too many poses for the shot. 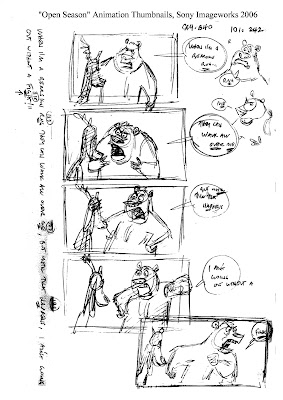 To the right is an example of some thumbnail sketches I did on the Sony Pictures animated film Open Season, back in 2004. There is one sketch for each "phrase" in the line of dialogue. Enough to tell the story, but not so many poses that the shot becomes over-animated. You can see the final result in the video above - similar (though not completely identical) to the original thumbnail sketches.

Get into a pose - and stay there
Often, students will get their character into a pose, and then almost immediately move into another one. After all, you don't want the character to do nothing, do you? But the danger with this approach is you have too many poses, and the audience gets confused. The solution is to get into a good, strong pose, and then stay there, keeping the character alive in the pose. It's what the old 2D animators called a "moving hold". It's also the basis of TV animation, where animators tend to stay inside a pose for as long as possible because of the sheer volume of work (often over 30 seconds a week) they have to get through.

The Moving Hold
Moving holds are a tricky thing to get right. If your character moves too much, the performance will feel floaty, but if the character stops moving completely, the animation will die, and the character feels lifeless. Working with CG puppets we must create the illusion of life, and this means keeping our characters moving, at least just a little bit.

Overshoot and settle
One classic way to get into a pose - and stay there - is with an overshoot and settle. To do this, create a pose that is more extreme than the one you want to end up in, and then settle into the final pose.

Once you are in the final pose, don't let the character stop moving completely. At the very least, keep the main motion control moving just a little bit - remember that all our motion comes from the core of our bodies.

We are constantly adjusting our position, our weight, our balance, without even knowing it. And we have to keep breathing too.


Posted by Alexander Williams at 07:00