What is "Successive Breaking of Joints"?

What is "Successive breaking of Joints"? It's really another way of talking about flexibility and overlapping action, which are very similar concepts.

The basic underlying premise is that in any action, everything shouldn't happen at the same time.

It was an idea developed by Disney animator Art Babbit, who gave a series of animation lectures at Richard Williams Animation in Soho in the 1970s.

Successive Breaking of Joints
The basic principle dates back to the 1930s, when the Disney Studios first discovered what would become known as the 12 Principles of Animation. 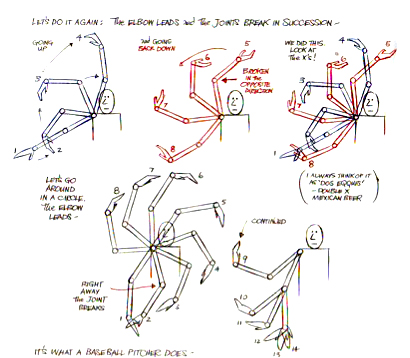 Animators have to follow the laws of Newtonian physics (or, at least, Cartoon Physics). Walt Disney told his animators: "Things don't come to a stop all at once guys; first there's one part and then another".

Consider the example on the right of a drummer, taken from the Animator's Survival Kit (the book every animator should own).

The motion is driven from the chest, shoulder, upper arm, and elbow, unfolding (breaking) through the various joints all the way down to the finger tips.

Not everything happens at the same time. The body parts are flexible, and overlap one another. Or, as Art Babbitt put it, it's about the "successive breaking of joints".

Wave action
Successive breaking of joints is similar in principle to a wave action, like motion of the tail of animal, such as a horse or squirrel.

One of the early exercises we have students do at Animation Apprentice is to animate a ball with a tail - see the thumbnails on the right. The idea is to master the principles of follow through and overlapping action, so that the body and tail don't move in unison, but feel flexible.


We also do a similar exercise with an airship, to show how an object coming to a halt doesn't stop all at once. Rather, the body parts overlap one another.


Mastering the Successive Breaking of Joints adds flexibility and believability to your animation. It also honours the basic laws of physics. Like everything in animation, we can break the rules, but we must learn to master them first.