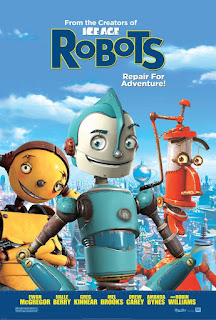 Blocking animation
What do animators mean by "blocking"?  We mean the process of establishing the main key poses in a shot, using stepped curves (i.e., single poses without any smooth transitions), so that we can test whether or not the shot will work.

On a high-end feature film, such as at Disney or Pixar, an animator might get a day (two, at most) to block out their work before showing it to the director.  For an animator on a TV series, with much tighter deadlines, you might be expected to block out a shot in an hour or so.

The key point to remember is that your key poses should include the character's facial expressions, so we know what the character is thinking and feeling.

The curse of the "T-Pose"
When you first open up your character in Maya, it typically arrives at your desk in the T-Pose. The facial expressions will be default - which is to say neutral. Your first job is to create the key poses, making decisions on the character's state of mind. Ask yourself: is the character happy? Sad? Angry? Most scenes involve a character in one state of mind, though perhaps changing to another in the course of the scene. Make these decisions up front.

Create a Face Camera
One useful solution to the problem is to create a Face Camera when you animate characters in Maya. You don't want to keep having to zoom in on your character in the viewport to find the facial controls; constant zooming in and out will slow down your workflow and, worse of all, encourages the animator to neglect the facial expressions altogether. Good facial expressions are crucial to making good animation, because it's how we know what the character is thinking and feeling. And without an emotional underpinning, your audience won't connect to your animation.

How to create a face camera
To create a face camera in Maya, follow these simple steps. First, create a camera, and name it faceCam. Then select the Camera, shift-select the character's head control, and parent the camera (Press P on your keyboard) to parent the camera to head control. Then, tear off the face camera (Panels/tear off) so you can return to the faceCam whenever you need it. This will save you a lot of time when animating facial expressions. To see this process in more detail, watch the video above:

Maya Speed Animator
Watch the video below on how to become a fast animator. It includes a number of lessons I learned at Blue Sky Studios, including the importance of adding facial expressions early.

Posted by Alexander Williams at 06:08