Ross Anderson Pulls a Rabbit out of a Hat 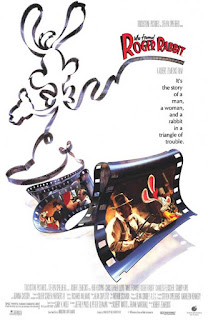 Canadian author and animation historian Ross Anderson is putting the finishing touches on his forthcoming book - Pulling a Rabbit Out of a Hat - The Story Behind the Making of Who Framed Roger Rabbit?.

Ross's book aims to be the definitive story of the ground-breaking film which I, along with with many others, was lucky enough to have worked on back in the late 1980s.

While his publisher is preparing for a Spring 2019 publishing date (the publishing industry is a slow-moving beast), Ross has put together a website full of wonderful stories about the making of the film.

Some of my favourite posts include this one about the ACME warehouse, filmed in a bus shelter a short walk from my own house in London.  I also have fond memories of being asked to sing "Smile Darn Ya Smile" just before the wrap party at the end of the movie. To see the video, recorded by animator Jacques Muller, fast forward to 33 minutes in the video below.

Ross's stories are all the better for being extremely well-researched (Ross's attention to detail is admirable) and therefore true.  For me, his stories are a beautiful walk down memory lane; Who Framed Roger Rabbit? was my first film and also my break into the industry.

My work on the film was mainly as an in-betweener (the drudge who did the "in-betweens"; the drawings that the animator didn't have the time or inclination to do). I didn't get to do much animation. But, two summers later, I got to work on RollerCoaster Rabbit, a shot film made at the Disney Studio in Florida. You can see a couple of shots below.

My experience of working on Who Framed Roger Rabbit? is also a reminder that, despite all the changes in our industry in the last 30 years, some things remain the same: it is still the case that, as a junior artist, your best chance of landing that elusive first job is to find a big production that is crewing up and needs a lot of bodies. It also helps to have an inside track - knowing someone on the inside of the production who can vouch for you is a very big advantage.

To read more about getting hired in into the animation industry - read this blog post.

Posted by Alexander Williams at 07:34