Learning to thumbnail animation is one of the hardest skills for junior animators to master, especially if they are not comfortable with drawing. But being able to do rough thumbnail sketches is an important part of the animator's toolkit, and in the video above I demonstrate how I approached thumbnailing a shot I animated on "Open Season". The trick is to create a plan for your animation so that, long before you start creating poses in Maya, you already have the shot figured out in your head. 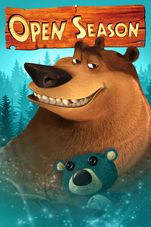 The line of dialogue is Boog saying "When I'm a bearskin rug, they can walk all over me, but until that happens, I ain't going out without a fight".

Sometimes the animator will get to watch video of the actor speaking the line in the recording studio. But, unfortunately, most often you won't get access to this footage or, if you do, it might not be that helpful. So, you have to figure out the acting yourself.

Get started by setting up your shot in Maya, and import the line of dialogue into the timeline. The audio waveform will show you where the big peaks and troughs in the line are.

Next, write down the line of dialogue and mark where the big accents are. I generally underline them (see below) and then indicate roughly where in the timeline the accents are happening. So, below, the first accent is on the word "rug", and this is happening at around frame 123 (the shot starts at frame 101)

There are also accents on "me", "happens" and "fight", so I have marked them too. Each one of these accents is going to become a pose in Maya, and I know roughly where in the timeline this pose is going to appear.

The line also naturally breaks down into four sections, or phrases, within the line. "When I'm a bearskin rug" (pose), "they can walk all over me" (pose), "but until that happens" (pose), "I ain't going out without a fight!" (pose).

I always draw my thumbnail sketches with little speech bubbles, as if I were drawing a comic strip, so I know what drawing corresponds with which bit of the line. I also like to draw a rough aspect ratio around the drawing, so I have a rough idea of the composition of the shot.  Below are my rough thumbnails. 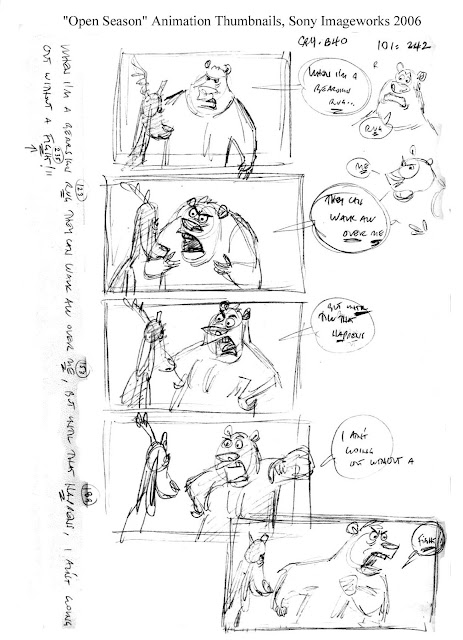 The key thing in the shot was to try to find the right body poses and facial expression for Boog, who is getting ready to confront the hunters - who want to shoot all the animals.  It is Boog's big Winston Churchill moment, and his expressions and body poses need to communicate defiance and determination.

After you have done your thumbnails and you are happy with the poses, you start working in Maya, blocking out your main poses on stepped curves. At this point, you stick to the thumbnails, and the timing, and execute your plan. Don't change your poses in mid flow.

One you have a pose test working, generally on stepped curves, you need to start adding breakdowns to your shot. The best tool for doing this is the excellent free Maya plugin - the Tween Machine. You can read about how it works here, and download it.

Keep adding breakdowns, using the Tween Machine, until you are ready to spline your curves. This stage generally comes after you have roughly one pose every four frames or so.

You can see the final shot as it came out (plus a bunch of others I did on the movie), below.

To see more about the process of thumbnailing and planning animation, see this post about the approach taken by master animator Glen Keane on Oliver and Company, and also his approach on The Little Mermaid.  Also check out this post about why thumbnail sketches need facial expressions.

You can also see the Playlist here at YouTube, all about animation thumbnails.


Posted by Alexander Williams at 11:07