Always Test Your Rig in Close-Up

There are many many free rigs and sets now available to students on an educational or freeware license for use in short films, creating a wide variety of creative choices for student film-makers.
But not all rigs are created equal, and many problems only become evident when the film calls for a close-up, such as this image of the spider "Raa" shown on the left.
The Trouble with Close-Ups
That same character or creature which looked great in a wide or a mid-shot suddenly looks low-poly and ugly in a close-up.  The best advice for student film-makers is to test your rigs thoroughly in advance (see this post on "rig wrecking") and, in particular, don't forget to do test renders early on, so that you can figure out the problems early enough to be able to find solutions.
Raa Animation by Alex Southcombe
Take a look at the animation above by Alex Southcombe. It's a stylish piece of creature animation which illustrates the problem well.  Alex has used the "Raa" rig, an excellent free rig which we recommend for learning creature locomotion.  However, Raa is a low-poly rig and doesn't look very good on close-ups.
Mid Shots and Wide Shots
Alex's shot works well at the start of the animation, when he gives us a mid-shot view of "Raa".
But as he pushes in close at the end, the shot works less well, as we start to see the rig for what it is - a low poly assembly of vertices.  To maintain the audience's suspension of disbelief, we should to choose a more high poly rig, or else keep the camera further away.
Test your Close-ups
This rule applies to most of the free rigs which are downloadable from sites like Animation Buffet or Turbosquid.  Unlike production rigs which are designed to be very detailed and robust, most freeware does not bear close-up scrutiny.  So, think twice before going in for a close-up, or else invest some time and effort upgrading the rig.
Film-Making Resources at Animation Apprentice
For more information on the making of animated films, read the blog posts below: 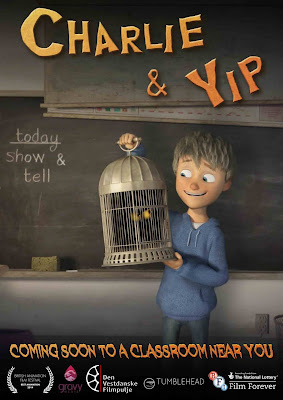