MPC and a Flying Elephant 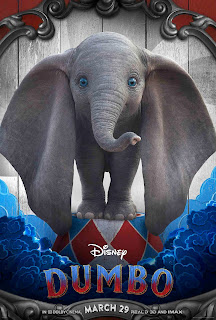 The starting point for the animators was to begin with live action reference. Dumbo is a baby elephant, so his motion has been based on real footage, and he has to fit into the real world of live action photography.

The animators began the process by animating walk and run cycles, and then added their own embellishments, to make the process "as efficient and as refined as possible".

Bringing Dumbo to life was a big challenge, in part because of the high expectations of this re-make of a much-loved film. 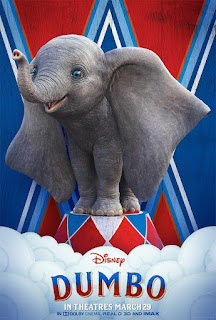 As with MPC's animation on Jungle Book, walks and run cycles are perfected and then put into a shot library, leading to a "library-based approach" to animation, where animators might start a shot using a pre-existing walk or run cycle and then add their own elements to it. This kind of approach ensures continuity and quality of performance across the show.

Flying elephant
To make the ears work, MPC designed a cloth simulation to make them as believable as possible. The simulation was built into the rig so that the animators didn't have to leave the ear animation to a different department, speeding up the process and getting an idea of how the ear animation would look as early as possible - even in the first pass, blocking stage of animation.

Learning to fly
There were three stages to animating Dumbo learning to fly.  At first, Dumbo learns to fly accidentally, when he sneezes; only later does he learn to control his ears and develop his skills. The animators did lots and lots of test animation on the film, long before they had actual plates to work with. These early character studies were essential because once you're in production, there is no time to develop the character; you just have to get the shot done.

For the scene where Dumbo jumps out of the bath, the animators struggled to find just the right reference for the shot, so for shots like this the live action reference was mainly for inspiration.

As with most photo-real animation, the animators had to strike a balance between the realism of an actual elephant and the cartoony anthropomorphism needed to bring the character to life.

These choices had to be made on a shot-by-shot basis. Extra work had to go into the animation of the eyes, to make sure these were as expressive and believable as possible. 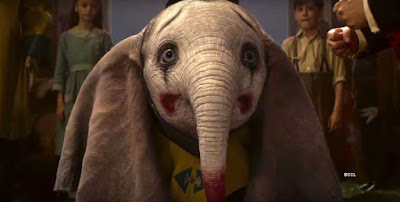 Elephant flight school
The physics of a flying elephant clearly don't work; elephants don't fly, and never will, so there isn't any reference out there that will help.

But the animators were able to find underwater footage of elephants swimming, which helped to inform what Dumbo's legs might be doing while he flies, "swimming through the air".

The animators also looked at the flapping motion of the wings of a manta ray. Combine those to two motions and "you have the beginnings of a Dumbo flap cycle".

Oliver described animating a new character like Dumbo as "like learning a language". As an animator, you have to learn the language of elephant locomotion, and of flying elephant motion. To make the animation work, the audience had to believe that the elephant is heavy, but despite this, that Dumbo's flight is still possible, and believable.

Live action set
On the live-action set, the actors worked with Dumbo puppets, to make sure that the acting and performance were right. Later, the puppets would be removed digitally, and replaced with digital animation, starting with rough blocking, and later including refinements. Then, a final version to get final animation approval from the client.  A complex shot might take 7-8 weeks to get it right.

Dumbo trailer
If you haven't seen the movie, check out the trailer below:

Posted by Alexander Williams at 01:28