Continuing this weeks' theme on the making of animation thumbnails, in the video above I show how Frank Thomas thumbnailed a shot from The Jungle Book, way back in the 1960s. Frank Thomas was one of the greatest Disney animators, one of Disney's so-called "Nine Old Men" (the studio's animation elite), and the system of using thumbnail sketches to plan your animation hasn't changed a lot since then.  The trick is to create a plan for your animation so that, long before you start creating poses in Maya, you already have the shot figured out in your head.

The line of dialogue is Baloo saying "Oh Gee Whiz, how did old baggy pants put it? He said...". He is talking to Mowgli, who is playing nearby and only half-listening.

The thumbnail sketches themselves are taken from the 1970s classic Disney book "The Illusion of Life" - a book that every animator should have on their shelf.

A system for planning animation
So, how do animators get started animating a shot? The trick is to plan the shot carefully. Listen to the line of dialogue, and try to imagine it playing as a movie in your head. Act it out yourself, and ideally film yourself delivering the line. Try to find acting choices that feel believable and authentic.

Create your project
Then, set up your project in Maya, and import the line of dialogue into the Maya timeline. The audio waveform will show you where the big peaks and troughs in the line are. Listen to the line many times until you know it by heart. 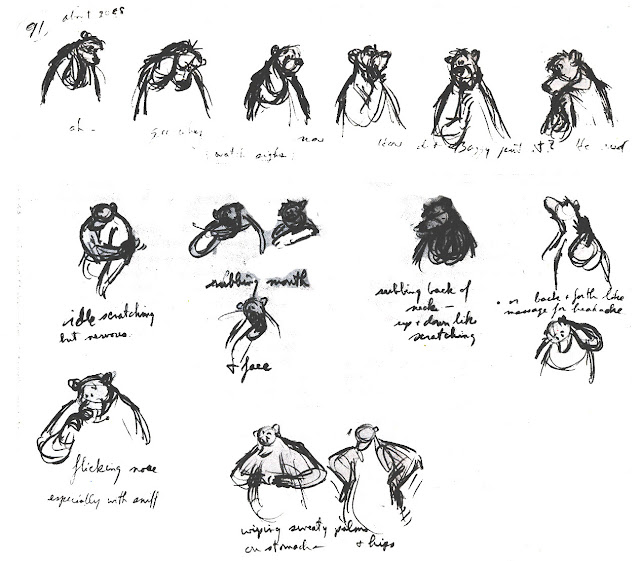 Start sketching
Next, take a sheet of A4 paper and, at the top, write down the line of dialogue. Then draw rough sketches, kind of like a rough comic strip, showing what poses will correspond to which bits of the line. In the sketches above, you can see Frank Thomas exploring different poses to communicate what Baloo is thinking and feeling.

Find the emotion
The emotion being expressed is anxiety - Baloo is having to break unwelcome news to Mowgli, and he doesn't want to do it.  So the poses explore awkwardness; rubbing the back of his head, scratching his nose, wiping his hands. Not all the poses made it into the final shot, but that's the whole point - Frank is exploring different ideas from which to select his final acting choices.

Below are the final animation drawings.  As you can see they are, in effect, cleaned-up versions of the thumbnail sketches. 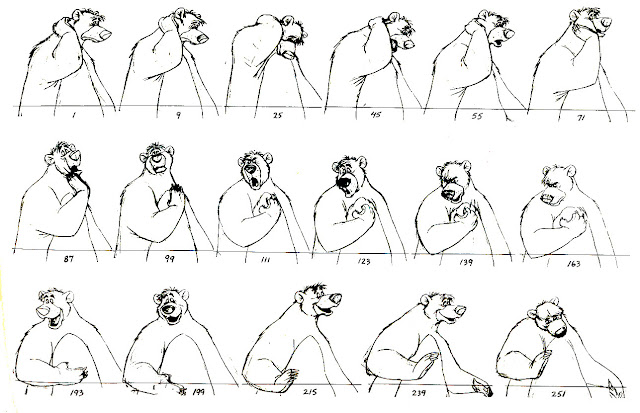 Think comics
I always draw my thumbnail sketches with little speech bubbles, as if I were drawing a comic strip, so I know what drawing corresponds with which bit of the line. I also like to draw a rough aspect ratio around the drawing, so I have a rough idea of the composition of the shot.

The key thing with drawing thumbnails sketches is try to find the right body poses and facial expressions for the character.

Pose test in Maya
After you have done your thumbnails and you are happy with the poses, you start working in Maya, blocking out your main poses on stepped curves. At this point, you stick to the thumbnails, and the timing, and execute your plan. Don't change your poses in mid flow.

Breaking it down
One you have a pose test working, generally on stepped curves, you will start to add breakdowns to your shot. The best tool for doing this is the excellent free Maya plugin - the Tween Machine. You can read about how it works here, and download it.

Keep adding breakdowns, using the Tween Machine, until you are ready to spline your curves. This stage generally comes after you have roughly one pose every four frames or so.

Resources for thumbnails
To see more about the process of thumbnailing and planning animation, see this post about the approach taken by master animator Glen Keane on Oliver and Company, and also his approach on The Little Mermaid.  Also check out this post about why thumbnail sketches need facial expressions.

You can also see the Animation Apprentice Playlist here at YouTube, all about animation thumbnails.


Posted by Alexander Williams at 07:48