Sooner or later all students of animation come across the work of Edward Muybridge.  Muybridge was a pioneering English photographer who spent much of his life in California, photographing studies of human and animal locomotion.

Muybridge's work, now in the public domain (i.e. the copyright has expired) is still of great importance to animators, despite having been done more than 100 years ago.

For almost any kind of animal locomotion, Muybridge is still very useful for life-action analysis, even in the era of YouTube.

Muybridge was the first person to figure out the precise details of horse locomotion, proving that in a full gallop there was a period in the horse's stride where all four feet left the ground - something that was impossible to detect with the human eye. 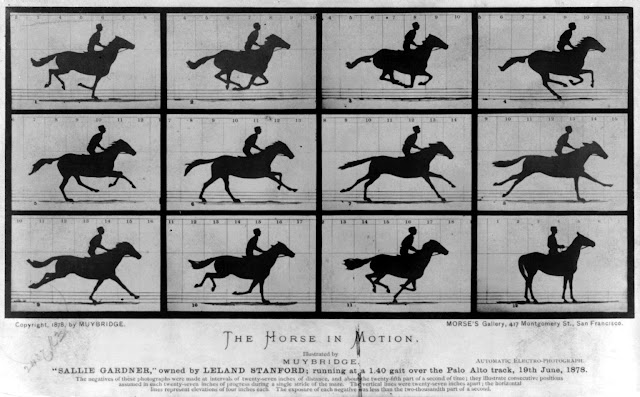 Eadweard Muybridge was born Edward James Muggeridge in 1830 in Kingston-Upon-Thames (a suburb of London), but changed his name later in life (he was not the first or the last Englishman to reinvent himself in California). He was an early student of photography, learning the so-called "wet-plate collodion" process, and patenting his inventions.

In 1877 and 1878 Muybridge did much of his pioneering work on animal locomotion, which used multiple cameras to capture motion in stop-motion photographs. He continued this work in the 1880s, at the University of Pennsylvania in Philadelphia, producing over 100,000 images of animals and humans in motion, capturing for the first time what the human eye could not distinguish as separate movements.

For example, you might think that when birds fly they push themselves forward through the air by pushing their wings backwards. In fact, take a look at the cockatiel in flight above, and you will see that the opposite is true. Birds don't "swim" through the air. Aerodynamics mean that their wings actually come forwards as they come down in the flap cycle. Before Muybridge, no-one could possibly have known this.

Muybridge had a fairly turbulent personal life which involved being tried (and acquitted) of murder. However, animators don't need to trouble themselves too much with his contribution to California legal history. It's his photography that is of interest, and of use, even today.

The KingstonMuseum in Muybridge's home town of Kingston-Upon-Thames hosts a collection of his equipment, and exhibits of his remarkable work.

Posted by Alexander Williams at 01:44