Above is a series of shots I animated during my two years working as an animator on "The Thief and The Cobbler", the never-quite-finished feature film that is sometimes described as "the greatest animated film never made". The ZigZag walk was my one of first assignments as a junior animator, and it was a tough one to figure out. The walk contained a lot of different elements all moving together in sequence but on different timings, hard to pull off and hard to get right.

Character Walks
Character walks are one of the most important parts of the animator's toolkit. It's where you start building a character's personality - how we move says a lot about who we are.

Add personality and character
Once you've got a basic walk cycle working, it is relatively easy, with just a few simple tweaks, to change completely the character's mood and personality. You can add a "double bounce" to make a character happy. You can slow a character down, and drag their feet, to make them sad. An angry walker might stamp their feet. All these changes can be done easily with just a few clicks. Working this way, we can break down apparently complex outcomes into simple, basic steps that any animator can master. 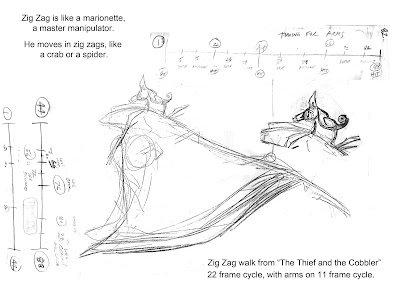 ZigZag Walk
The Zig Zag walk was complex to figure out. The timing of the walk had to match the music, which was composed on a 22 frame beat, ie one step every 22 frames. This amounts to a very slow walk, around half the speed of a standard walk on march time (1 step every 12 frames).

On the right is a copy of the original director's sketch, to show how ZigZag should walk. You can see from his pose that he has his nose in the air, and he isn't looking where he is going - he's far too important for that.

Feet and slippers
ZigZag's feet move in a zigzag fashion (ZigZag by name, ZigZag by nature), wrapping around his knees and popping out as he moves - impossible to a human being to actually achieve. But then, ZigZag was designed as a marionette puppet, the ultimate manipulator of human affairs.

Menacing hands
His hands move back and forwards like knives, slicing forward and backwards on an 11 frame cycle.

Meanwhile his head moves up and down, disappearing into and out of his vulture-like shoulders. Finally, his slippers unroll and roll as his feet touch the ground, making a little snake-like gesture at the end to underline the reptilian nature of ZigZag himself.

Background characters
I also had to animate all the other characters running around in the background, including the slaves who fan ZigZag with ostrich plumes, and the other minions who run furiously around ZigZag (on a 6 frame fast run cycle), rolling and unrolling the carpet so that his feet never touch the ground.

The idea was to create a character filled with his own self-importance, oblivious of where he was going, with minions and slaves to cater to his every whim. But, at the same time, a ridiculous figure, wrapped up in his own pomposity.

Character Walks on your demo reel
Animation students often think that you can't put a walk cycle, or a character walk on your demo reel, but you can. Walks can and should appear on your reel; they are like the musical scales of animation, necessary to know and fully understand. Putting a good walk cycle on your reel shows an animation director that you how how to do it correctly. Adding a variety of different walks shows that you can add personality and character. For example, check out the work of Alexander Savchecnko below:

Walks and loops from Alexander_Savchenko on Vimeo.

Alexander Savchenko's reel is a great example of the amount of character and personality you can get into a character walk, and also shows how much fun you can have with simple character rigs. Multiple different walks, runs and other gaits help to show a diversity of skill and showcase the animator's flexibility.

Posted by Alexander Williams at 04:35