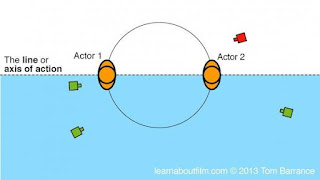 By keeping the camera on one side of an imaginary axis between two characters, the first character is always frame right of the second character.

Moving the camera over the axis is called jumping the line or crossing the line.

Crossing the Line Confuses the Viewer
The problem with crossing the line is that it disorientates the viewer, and confuses them.  Since your goal as an animator (and also as a director and cinematographer) is not to confuse your audience, you want to avoid crossing the line.  The simplest way to do this is always to keep the characters on one side of the screen or the other - never let them switch places.

Maintaining Screen Direction
Crossing the line is almost (but not exactly) the same thing as maintaining screen direction, which is a very similar and related concept; the two are usually considered together. If you maintain screen direction (eg, Orange on the right, Blue on the left) correctly, then you should also avoid crossing the line as well.
Crossing The Line in "Gladiator"
To see how Ridley Scott crosses the line in the classic film "Gladiator" (but does it with style and skill), watch the short clip below.

Posted by Alexander Williams at 07:58