Pixar animator Aaron Hartline was in London last week, giving a talk at the VFX Festival in Shoreditch.

Later that day, Aaron gave a great talk at Escape Studios in Shepherd's Bush about some of the important principles of animation, including the Line of Action - a concept first developed by Disney animator Preston Blair, who published one of the first practical books on learning animation back in the 1950s. 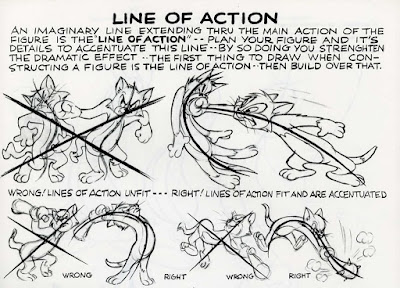 Preston Blair's book out of print, but you can still buy used copies at Amazon.

His work is still relevant today, because - although the technology has changed - the principles of animation remain the same.

The line of action follows the spine through the root of the body, and extends into the legs and arms.

A good animator uses the line of action to get dynamism and life into the key poses, so that the silhouettes read clearly and the motion feels dynamic. 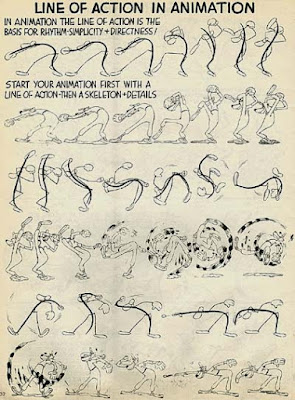 Aaron showed how he applied these principles to his shots on Pixar films such as "Up", where he animated Carl trying to lift his house up off the ground.

He showed us how he made sure he had a great line of action running through his key poses, making them read clearly and - crucially - making it more likely his shots would get approved by the director.

Pixar uses Presto, a CG animation tool developed in-house which is similar to Maya (but much better! - says Aaron).

Email ThisBlogThis!Share to TwitterShare to FacebookShare to Pinterest
Labels: 12 Principles of Animation, Animation techniques, Line of Action, Tips and Tricks