Why Animators Need to "Progress the Action"

One of the most common mistakes made by junior animators is not progressing the action in their animation. In other words, making animation that is too static and immobile.

Progressing the Action is a concept developed in the Animator's Survival Kit, in which Williams describes it as the "secret of lipsync". But what does progressing the action really mean? And how does it work in practice?

Below is the section on Progressing the Action, taken from the Animator's Survival Kit. Williams is talking to Milt Kahl, one of Disney's so-called Nine Old Men, who animated (among many classic characters) Brer Rabbit and Brer Fox in Song of the South.  They are discussing the secret of lipsync, or animating dialogue. 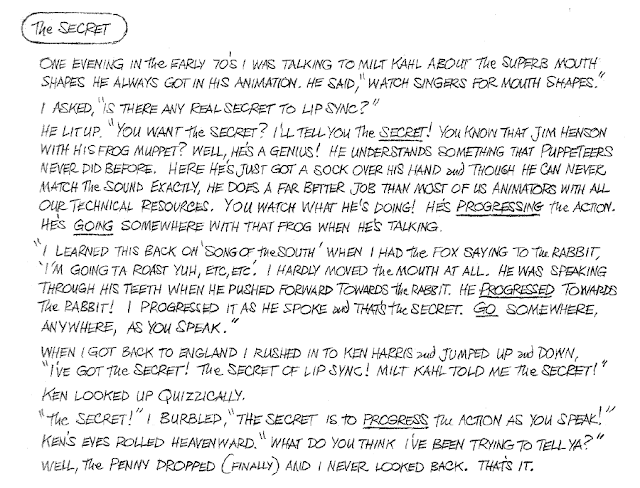 To see the animation Williams is talking about, watch the video below, and fast-forward to 2:31. The Fox is actually saying to the Rabbit "I specs [expects] I'm gonna skin ya" (not "I'm gonna roast ya"). But the dialogue doesn't matter. The point is that,  as he says it, Brer Fox moves in closer towards Brer Rabbit, progressing the action.


For animators, the key thing is not to have your animation start and finish in the same point. Make sure you always go somewhere, from A to B to C. Not A to B and back to A again. Always, if you can, progress the action.


Posted by Alexander Williams at 02:50