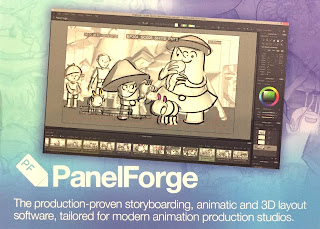 One of the highlights of last week's Blue GFX Expo was a presentation of Panel Forge Pro (the first public demonstration of the software), a new storyboard and pipeline tool which has now been extensively road tested at Blue Zoo on the Miffy the Rabbit and Digby Dragon TV Series.

Panel Forge uses 3D Layouts – much like its rival Redboard (also developed here in London) – to save time in Storyboarding.  Panel Forge allows board artists to use low resolution 3D assets to help set up camera angles and layouts, and has been used on “10,000 shots” to date.  So, what is Panel Forge all about, and why should our students be interested? 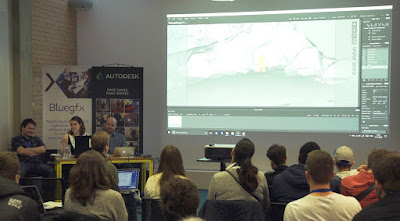 Panel Forge is all about solving problems. And the biggest problem with storyboarding is you have to do too much all at once.

Board artists have to deal with drawing sets and layouts (drawing in perspective), designing camera angles accurately and - all at the same time - describing the action of the shot and also expressing the character's emotions and feelings. It's a lot to do, all at once.

Like Redboard, Panel Forge helps board artists to set up the shot and solve a number of these problems long before they start drawing.

According to Blue Zoo's Tom Box, the software is designed to use “big data sets” and be super fast and also easy to learn. The software uses .obj files and .pfe files – the last a proprietary Panel Forge file type.

One of Blue Zoo’s storyboard artists did a quick demonstration of Panel Forge – the first time the software has been publicly demonstrated. Artists start off by making asset libraries of characters, sets and props. You can import low resolutions models, and you can dolly move and zoom around the objects – just like in Maya. You can also move pivot points and move objects around – just like in Maya (or indeed any 3D software).  The camera also has a full range of tools so you can position it easily, dollying, moving and zooming. Camera focal length is also fully adjustable.  For storyboarding, you can draw over the 3D models, and strengthen the pose – or make the pose completely different.

Panel Forge can also be integrated with the Maya pipeline. You can import models from Maya to Panel Forge, and also export a xml file which can be imported into Adobe Premiere. Once you like the animatic you’ve done, the animators can import the xml file into Maya, and then start work on their shots.

Jellyfish pictures in London are also using it - the PanelForge team wanted to test out the pipeline at more than one studio, and make sure the software works across multiple platforms. The logic of using Panel Forge is that it "saves a heck of a lot of time and money" on production - allowing the studio to concentrate resources elsewhere, such as in character animation, lighting and rendering.

Panel Forge will soon be on sale to the industry, and event hosts BlueGFX are the exclusive resellers of the software.

To see how it works, watch the video below.


To find out more, go to the official site at www.panel-forge.com. You can sign up for the mailing list, and even get involved in beta testing the software before it goes on sale!

There is also a good chance of a student license - hopefully available soon.

Posted by Alexander Williams at 02:44