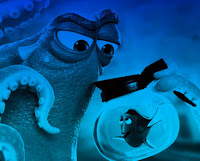 What's this all about?
It's chance to meet the film-makers behind the new Pixar smash hit - Finding Dory.  Join director Andrew Stanton, producer Lindsey Collins and co-director Angus MacLane as they discuss the creation of the sequel to Disney Pixar’s Academy Award—winning Finding Nemo. Finding Dory follows the amnesiac fish Dory on her journey to be reunited with her parents.

Posted by Alexander Williams at 04:04