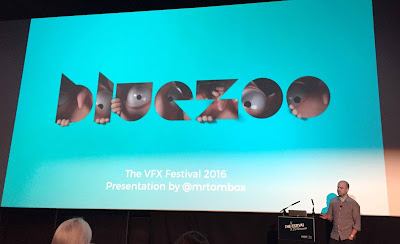 Blue Zoo is one of the UK's most successful independent animation studios. Founded in 2000 by a group of university graduates, they have gone on to produce excellent commercials and TV Series, as well as some very creative independent short films.

But how does a studio like Blue Zoo stay creative, while at the same time managing the demands of a commercial pipeline, and getting their jobs done on time? At the recent Escape Studios VFX Festival, Tom Box explained how they get it done.

History of Blue Zoo
Blue Zoo started back in 2000, when it was just "four people in a crappy room”. These humble origins remain today "a part of who they are". As founder Tom Box put it, "most animation studios evolve out of other studios. Blue Zoo didn’t do that". The founders were "a group of friends from uni", they were "very independent and have stayed that way".  Best of all for a startup, they started out "with nothing to lose. If it didn't work, they'd just have to go out and get proper jobs".

Blue Zoo began life "with a small loan from a family friend to buy some computers". From this small start, they "evolved our own ways of working". This go-it-alone philosophy is “part of their success”.

For example, because "they didn’t have a big renderfarm, they had to render their whole TV series on the GPU". This meant "they got very efficient – by necessity, not by design". Blue Zoo "have evolved as an island". But they have stayed "very competitive in a tough industry".

Growing pains
As Tom put it, "it is hard for small companies to grow the right amount. You want to maintain the quality, grow, and also make a profit". Blue Zoo aim to produce "the highest quality animation for the price". In pursuit of this, they "aim for quality", and hope that  "the rest will follow”. But in the end, "quality comes from creativity". You "can’t have quality without creativity".

1. Communicate.
Communication is "the most important thing". Because, "if your artists can’t communicate, it will descend into blame, chaos and resentment". Blue Zoo have a "company wide email list – anyone can talk about whatever they want". The result of this is that there are “lots of cat gifs flying around”, but it is "vital that everyone is friendly and gets on well". If not, then "negativity spreads very easily - until its too late to fix". At Blue Zoo, "if someone is unhappy, its important to fix that". Because "happy people make good work".

2. Collaborate.
Collaboratio is vital and it "helps in many ways". Animation is "one of the most collaborative art forms that exists", and it is "hard to do it alone". To make a great show, "you need great modelers, riggers, textures, lighters - you need a very good team".

At Blue Zoo, "making short films is one of the ways we stay collaborative. This is easy when you are small, but gets much harder when you get big". The tendency with shorts is that they are "hard to do, and nothing ever gets finished”. So, to solve this, Blue Zoo "take a chunk of their profits each year and ringe-fence it” - and devote it to short films.

Clients tend to say “I'll have a bit of that kind of animation”. Which is great, but this can mean "you don’t break out of your style". By contrast, doing shorts "allows you to experiment". If you look at the Blue Zoo demo reel – "much of this is the shorts work".


A core part of the Blue Zoo ethos is "including everyone". At the studio, "everyone can pitch ideas and everyone gets to vote. Their latest short, More Stuff, was a "parody of the Walt Disney musical style". Two animators, at Blue Zoo, "Simone and Joe, won the pitch to co-direct". They were given "ten weeks of studio resources to finish it". More Stuff ended up "with five core people working on it", plus extra help. They "divvied up the shots" among the animators and lighters in the studio.


Commuter Glitch enabled the team at Blue Zoo to "work together in an unstructured way”. Each animator "could animate just two seconds, and then pass it on to the next animator, without even seeing what the other had done”. It was "an experimental project", but it had the effect of "helping to show their studio in a different light”.

In the end, Blue Zoo were seen as "much more creative and experimental", and Disney in Burbank went on to ask Blue Zoo to make some channel IDs. The brief from Disney was “do what you want” - so Blue Zoo were able to do some "purely experimental" work.

3. Competition.
Healthy competition "motivates people to do better work". But, it "must be healthy competition". It must be the right kind.  Competition "can backfire if you are not careful", since "you also need to keep the collaboration going". At Blue Zoo they have a "Daily Doodle" on a chosen theme, and everyone contributes their own sketch. They also run "Zbrush sculpting challenges".

4. Recruitment.
Blue Zoo "are nothing without staff". The studio wants to recruit "staff who are eager and need to learn to improve, they must have room to grow".  It is also "vital to build teams that work together". When prospective candidates apply and are interviewed, the interview is really about “are they nice people? Are they a good fit for the team?".

5. Sharing.
Every friday the studio has showings, where they "show recently completed work". This is a way to "keep everyone in the loop  - it's important to share what we’re all doing". It's also important "not to be rude about other people's work. Constructive criticism is vital". Artists shouldn't say that other people's work “looks a bit crap”. Artists needs to "stay inspired". One way of doing this is through the "company intranet", through which everyone can "be aware of cool animation that inspires".

6. Stay Challenged.
It is important for the studio to stay challenged "creatively, and also by learning new software".  In the TV Series work, Blue Zoo recently "moved from After Effects to Nuke". Why? Because the "staff wanted a new challenge". So, even though Blue Zoo "had to buy new licneses", they felt it was worth it to "keep employees motivated" and to "give them new skills".
Blue Zoo also "moved into Redshift rendering". Learning new skills "keeps people engaged and motivated". Conversely, "unmotivated people aren’t happy"

Blue Zoo are also doing some cool Virtual Reality projects – including a 360 Virtual Reality story. They also do games, and offer "free life drawing classes" for employees, and "free gym membership". There is also a "film project they are working on".

7. Socialise.
A "good studio is friendly", with a "minimum of politics and cliques". This "might happen naturally", but to make sure it does, the studio "does as much group socials as possible", including "free beer at 5pm on fridays".

8. Environment.
If the studio "feels like a solicitors office, it won’t feel inspiring". In Soho the Blue Zoo people "got a bit detached because the layout was lots of small rooms". Now, having "everyone in one big room helps communication, and generates more spontaneity of ideas".

9. Lead by Example.
Blue Zoo are "fortunate, as we are privately owned, we can be more altruistic". One example of this was Ollie Hyatt, one of the co-founders of Blue Zoo, who "spent a lot of time championing Animation UK – to bring tax breaks to the UK". Since the tax breaks were introduced, this has "led to a 300% increase in animation in the UK". As a result, Blue Zoo "now struggle to find good animators." This has been "great for the industry as a whole".

At Blue Zoo, there are "no managers’ offices". Everyone, including the founders are "in the open office", and there are "no sectioned-off rooms". It's all about "approachability and sharing". Also, there are "no runners, since managers can make their own coffee". Instead, Blue Zoo offer "paid internships. This is more egalitarian – it helps the less well-off to break into the industry".

In the end, Blue Zoo "want to make great animation – they don’t want to sell the studio to the highest bidder and make a quick buck and buy a sports car".

10. Don’t be a dick
The "key to being successful is….don’t be a dick". It's important to treat people well; and Blue Zoo only want to "work with nice people". This means that all employees "should treat an intern as well as you would treat your boss."


Posted by Alexander Williams at 03:05